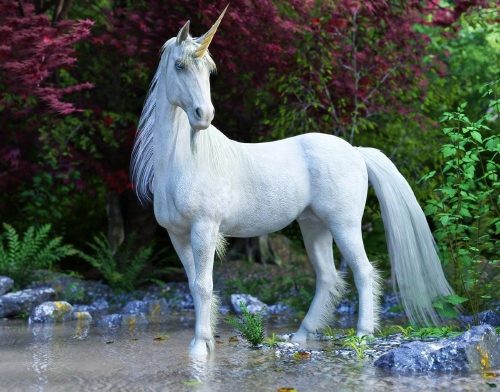 National Unicorn Day is today and Unicorns are also the National animal of Scotland.

With Scotland being famous for its love of myths and legends, there is no surprise that a creature such as
the unicorn is Scotland’s national animal. Unicorns have been linked to Scotland for centuries. The unicorn
was first used on the Scottish royal coat of arms by William I in the 12th century. In the 15th century, when
King James III was in power, gold coins even appeared with the unicorn on them.

When Scotland and England unified under the reign of James VI of Scotland in 1603, the Scottish Royal Arms had two unicorns supporting a shield. When James VI became James I of England and Ireland, he replaced the unicorn on the left of the shield with the national animal of England, the lion, to show that the countries were united.

The unicorns’ distinctive appearance has left a lifelong legacy on Scotland’s cities and towns, many of which still have unicorn heraldry. When you next visit see how many you can spot as you explore different areas. Some of Scotland’s most important historic buildings and statues feature the unicorn. They can be found at:

🦄 On a gatepost at the Palace of Holyrood House, Edinburgh. This is one of the official residence of Her Majesty The Queen. There is also a Unicorn at the gatehouse of the Queen’s Gallery.

🦄 The front of the National War Museum and St Margaret’s Chapel at Edinburgh Castle, an historic fortress which dominates the skyline of Edinburgh.

🦄 The figurehead of HM Frigate Unicorn in Dundee, the country’s only water-based unicorn. It is Scotland’s only surviving example of a wooden warship and one of the six oldest ships in the world.

🦄 The top of the Great Hall at Stirling Castle which was once a favoured residence of the Stewart kings and queens and one of Scotland’s most historically important sites. Within the castle, you will also find the beautiful Mystic Hunt of the Unicorn tapestry.

You can find out more about it here on the Visit Scotland website.

Unicorns for all ages

Unicorns have long been popular with all ages and my youngest daughter, Serena, is particularly fond of them. I recently knitted both Serena and another young unicorn lover a unicorn bobble hat!

Historic Scotland are celebrating National Unicorn Day by having a ‘Virtual’ Unicorn Day. Starting at 10.00am with a Magical Unicorn tour, 12 noon a Puppet show, 2.00 pm Meet the Unicorn and at 4.00pm Storytelling, The Unicorn in the Castle. You can find out more and take part by visiting their site here 👉🦄

Book directly for the best rates.

How can we help?