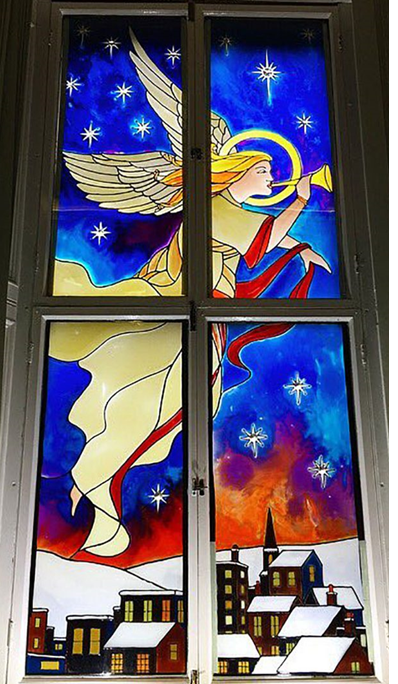 Christmas preparations are underway at Millburn for the first time. This time last year we were coming to the end of our careers at the school we both worked at. I was preparing to film the Christmas production for the last time , it never failed to bring a tear to my eye. Ian was enjoying his last roll as Santa in the grotto always happy to chat and give out gifts.

Our Christmas this year will not be as we planned, like for so many. My parents were due to be joining us to see our new home and to enjoy Christmas and New Year. But due to restrictions it makes it impracticable and unwise. So we are looking forward to next year, when things are hopefully safer and more stable and everyone can enjoy themselves more freely.

In years gone by. as a child, we have enjoyed sharing an advent calendar. As the third of four daughters we used to take turns getting to door 24. My mother used to keep a note in her diary of what the order was, so it was fair. We had an advent calendar for my daughters to share and eventually they wanted the chocolate variety but I always preferred the traditional ones, even with glitter!

What a surprise it was this year to receive a Parkinson’s UK calendar from my sister Elspeth. I learnt that they as a family used to guess what was behind the doors, so this year, with identical calendars, we have joined in. Imagine our surprise when so far we have managed to guess five right. I’m sure there will be no surprise as to what is behind door 24, we will all be winners. This is something we will include in our Christmas preparations for 2021.

One of the nice things about living in Dunvegan Village is being able to join in with community activities as part of the Christmas preparations 2020. We found out that Dunvegan Primary were organising a virtual advent calendar. Families chose a date to take part and on that day they decorated their windows or lit up their house. We were lucky enough to be able to take part. Locations are put on a map with the date they were to be lit up so you can go and look.

When in the last year Hague Bar Primary School I remember painting on windows as part of our Christmas preparations, some time ago! Having searched on line for a suitable picture to use in our bay window in the guest lounge, I found I kept coming back to this picture. A bit adventurous but willing to give it a go!

As we have six windows in our bay I divided it into six and cut out pieces of lining paper to use as a stencil.

On the morning of 15th December we were lucky that it was not raining. I fastened the panels on the outside of the window and using a black chalk pen drew onto the window. There was no going back now!

With the help of Acrylic paint I start to fill it in.

The final article was much better than I could have hoped for. Perhaps I did have a few of my father’s, John Ward, genes after all! It took me most of the day.

In the dark back lit with a lamp

Here are some of the community ones we have been able to get pictures of,

We have enjoyed taking part and look forward to other events in the futre.

Ian and I would like to wish you all a very Merry Christmas and a healthy and Happy New Year.

One final thing, some of you who have visited Skye will already know of ‘Dobby’, as Ian calls him. The Breakish horse stands at the entrance to a croft and is regularly adorned with seasonal attire. This is his current outfit.

Book directly for the best rates.

How can we help?